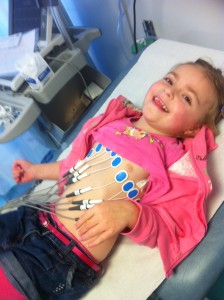 Lauryn is 5 years old she has Cerebral Palsy. She uses a wheelchair, has a pace-maker and she may never walk. On May 14th, her parents received a letter in the post from the HSE to say that her medical card, that she was given upon her diagnosis at 15 months old, is being taken away. “No reason, nothing, just her name, her number and a line stating that she was unsuccessful in her appeal to keep on to her medical card,” said her father, Gavin. Gavin explained that Lauryn got a discretionary medical card when she was a baby on the basis of her condition.

The card expired in October last year and the family were told that it wasn’t going to be renewed. “There was no reason given as to why it was being taken off her. She has the same illness she always had and will have for the rest of her life,” he said. “It couldn’t have been because of means, as if anything, our means are a lot worse-off than when we got the medical card. Last year my wife lost her job, we are now trying to get by on just one wage packet and it is not easy, so this came as a real blow. We just can’t understand it,” explained Gavin. He said that they talked to Lauryn’s physiotherapist and doctors, saying, “They told us that this was happening to everyone.

“They were hearing of loads of parents in the same circumstances. They told us that usually if you appealed they would give it back, it was just a way of finding out who would fight it,” he said. That’s what Lauryn’s parents did – they appealed the decision, they sent off all the relevant documents and hoped that the matter would be resolved speedily. “We waited and waited. My wife called every week from October to December asking if a decision had been made. In all this time Lauryn did not have her medical card,” he explained. “Eventually around December they got back to us and told us they had lost all our documents and that we would have to re-submit them,” he said.

He said they gathered all the relevant documentation, again, and sent it all back. “We had a letter from her doctor at the Central Remedial Clinic (CRC) where Lauryn get treatment stating that she had a pace-maker in her heart because of an AV block and it was keeping her alive.” He said the HSE got back to them stating they would need more evidence of her condition forcing them to get the head doctor of the CRC to write another letter stating the same thing. From December up until last week Lauryn’s parents called to see what the hold up was. “We were being passed from Billy to Jack – no one knew everything.” “Yesterday we came home to a letter. The same thing. Her name and number. This time there was a line stating that her appeal had been turned down. There was no explanation given as to why it was taken from her in the first place or why her appeal had been turned down,” said Gavin. 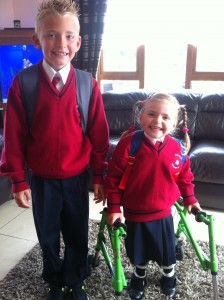 Lauryn has Cerebral Palsy, a condition she is going to have for the rest of her life. It is a long-term illness. It isn’t going to improve. She may never walk again and it has to be managed.  When asked how the revoking of the card is going to impact them Gavin explained that Lauryn needs constant care, doctors appointments, physiotherapists, walking frames and equipment. She also goes to Temple Street Children’s Hospital for regular botox injections to loosen her muscles and also Crumlin Hospital as her pace-maker will need to be replaced every seven years. “These are all things she needs and over the next few years she will need a lot more assistance,” he said, adding his worry is that now it has been revoked she will never get it back.

“I’ve done everything I am meant to do. I work, I pay my taxes, I pay my USC, I pay my property tax and I have politicians calling to my door every night looking for my vote. I tell them, out of sheer frustration, to look at my daughter walk. ‘She can’t’ I say, and now this. How is it right? How can they take this from her? This is something she should be entitled to,” said Gavin. Gavin said that he is very frustrated that they can just take this from Lauryn, adding: She is just like any other five year old. She wants to do everything, just like any other little girl her age. She never complains or gives out, she just accepts what she has. It’s simply not fair.”