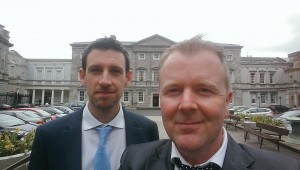 We are just three guys, running this campaign on a completely voluntary basis.

We are supported by our wives Tracey, Lorna, Wendy and our extended family and friends.

In advance of our launch and since then, we have met personally and been contacted by, hundreds of parents of seriously ill children and many more supporters & concerned groups.

These parents are stuck in a channel between home and the hospital. We are here to give them a voice.

Kevin & Tracey’s first hand experience in applying for and attempting to hold on to a card for Louise following her cancer diagnosis inspired our campaign.

Mark and Wendy had a similar experience following the birth of their youngest Son, Eric, who after some time was diagnosed with the ultra rare condition KCNQ2.

But this isn’t just about Louise & Eric.

This is about Isabella, Éabha, Ben, Katie, Lauryn, Alexander – this is about all of our children.

We fundamentally believe that every child in Ireland that is born with or develops a serious medical condition should be entitled to, and automatically issued with, a medical card for the duration of their illness, up to and including the required aftercare as specified by their consultant. This can only be brought about by amending the Health Act of 1970 that establishes the terms & circumstances around which medical cards can be granted. Simply, the law is the problem. Our aim is to change it. 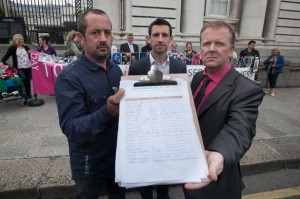 We are entirely apolitical. We are not aligned to any political party. We do however want to work with every political party & TD in Dáil Eireann to achieve our aim. In this regard, we sent the first of our letters to every TD on May 20th.

We have received strong support from other advocate groups that have long campaigned for medical cards to be granted on the basis of medical need and not financial means.

Peter is 35, married to Lorna and they have one child. The family live in Ballyfermot, Dublin. Peter graduated with a degree in computer science in 2002. Peter currently works for a Dublin housing association.

Kevin is 44, married to Tracey and they have 3 children. The family live in Clondalkin, Dublin. Kevin studied at Mater Dei Institute and has a masters degree in theology and education. He is currently a home school community liaison coordinator at a west Dublin secondary school.

Mark (no relation to Peter) is 39, engaged to Wendy and they have 2 children.  Mark is a qualified electrician and is well known in Dublin GAA circles.  The family live in Donaghmede, Dublin.

Who is funding your campaign?

Set up costs to date come to approximately €2000 which has been put on a credit card. That breaks down as approximately €550 for website & hosting, €700 – ish – for our (very large) banner & €180 for conference room hire. The remainder is well accounted for by parking and clamping fees. We are not seeking donations currently and do not want fundraising or any other issue to detract from the reality facing parents and our core goal – to change the 1970 Act.

No tweets to display.