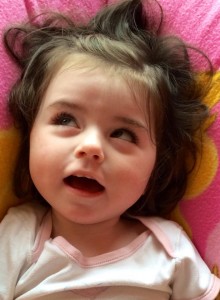 She looks so helpless, so sweet, so fragile. Don’t let the photo fool you. Isabella is the bravest, toughest little girl you could ever meet. She is much stronger than you or me. She has to be…

Isabella was born on 23rd February 2011. Each minute since then has been a constant struggle. Izzy fights to survive every single day and every day she wins. That is strength.

During birth the umbilical chord wrapped around Isabella’s neck. That’s pretty common and only as a precaution she was taken to intensive care. Still, her parents, Fran and Sam, were beside themselves with worry.

Then the doctors found fluid on her brain.

Izzy began to suffer violent seizures. She was transferred to the Children’s Hospital where she underwent CT and MRI scans.

When the answers finally came, it was worse than anyone could have imagined…

Izzy was diagnosed with Aicardi Syndrome. You have probably never heard of it. Isabella’s parents hadn’t. This is because Aicardi Syndrome is extremely rare. There have only been a few hundred reported cases around the world. It is a genetic brain disorder that typically only affects little girls.

Isabella would need constant care and attention every day of her life. She would need to take a range of powerful medications to manage the seizures. She wouldn’t develop like other children. Everyday of her life will be a constant struggle for her and her family….and eventually Isabella’s life will be cut short because of this crushing condition. 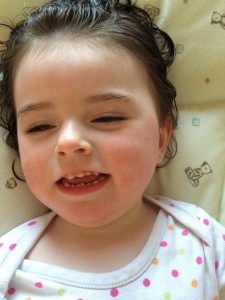 Their first application for a medical card was handled under the old system of local applications offices. Initially their application was declined as they were above the means test but with the help of their social worker, Isabella was granted a medical card for one year.

The following March, Isabella’s card came up for review, Sam & Fran duly set about completing the form and gathering all the required documentation. In May a letter arrived from the HSE, Isabella no longer qualified for a medical card. Sam can remember that day like it was yesterday. She felt ‘physically sick’.

Staff from LauraLynn came to visit that same morning to assess Isabella for respite, they advised the family to get their TD’s involved, and they did. In the mean time they had to launch an appeal to plead that her card be reinstated.

The family set about getting letters from everyone possible – consultants, therapists, pharmacy, social worker etc.

Sam describes how it was so upsetting for them, “it really felt like they just didn’t care about Isabella.” Sam also had to declare that Isabella’s condition is life limiting, and spell out that she will not be with the family for a long time.

Eventually a TD helped to have Isabella’s card reinstated, up to then, the family were considering moving to Scotland, somewhere they wouldn’t have to fight. Isabella’s card will shortly be up for renewal again:

“I am very scared, I know so many parents are having problems. Aside from that, the HSE are just not good to deal with, they fight you every step of the way, even regarding things like nappies. All I want is to care for Isabella, but on top of that I have a full time job fighting the HSE for what she needs.

I look at her every day in amazement, she is still here smiling & gorgeous. I wish they could see her struggle and realise how much we need the card”. 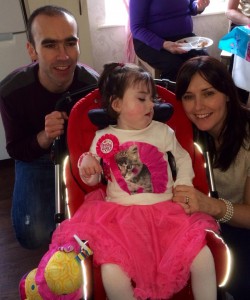